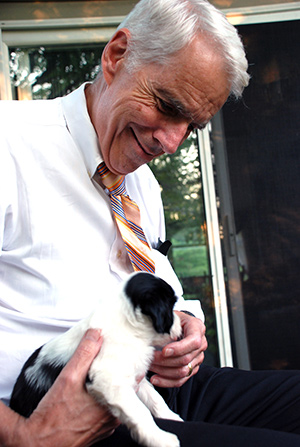 Paul C. Holinger, MD, MPH, is Faculty and former Dean of the Chicago Psychoanalytic Institute, Training and Supervising Analyst, and Child and Adolescent Supervising Analyst. He is Professor of Psychiatry at Rush University Medical Center, Board Certified in Psychiatry and Board Certified in Child/Adolescent and Adult Psychoanalysis, and Distinguished Life Fellow of the American Psychiatric Association. He is also co-founder of The Center for Child and Adolescent Psychotherapy at the Chicago Psychoanalytic Institute.

Following his medical and psychiatric training in Chicago, Dr. Holinger did a Fellowship in Psychiatric Epidemiology in Boston, where he received a Masters of Public Health from the Harvard University School of Public Health. He then did a Fellowship in Psychosocial Public Health at the University of Illinois in Chicago. Subsequently, he obtained adult and child/adolescent psychoanalytic training at the Chicago Psychoanalytic Institute.

Dr. Holinger has authored numerous articles and books in psychiatric epidemiology, psychoanalysis, and infant and child development, including Violent Deaths in the United States: An Epidemiologic Study of Suicide, Homicide, and Accidents (NY: Guilford, 1987) and Suicide and Homicide Among Adolescents (NY: Guilford, 1994).

Through a series of papers and two books on psychiatric epidemiology and violence, Dr. Holinger made two significant advances in our knowledge. First, he showed that over time, suicide, homicide, and motor-vehicle accident death rates ran parallel. This overturned the long-held assumption that suicide and homicide rates were inversely related. He proposed that violent deaths have a common thread similar to the self-destructiveness and depression evident in suicide, but which is manifested as risk-taking behaviors in other forms of violent death. Second, he linked population variables with violent deaths. He documented that as older-age cohorts increased in population, their suicide and homicide rates decreased. When younger-age cohorts increased in population, their suicide and homicide rates increased. In as much as one knows in advance what shifts will occur in the population cohorts, this association can be used predictively to initiate proactive prevention strategies.

With respect to infant/child development and psychoanalysis, his book What Babies Say Before They Can Talk: The Nine Signals Infants Use To Express Their Feelings (NY: Simon & Schuster, 2003), was a Book-of-the-Month Club selection and has been translated into several languages, including Spanish, Chinese, and Arabic.

Learn more about The Center for Child & Adolescent Psychotherapy

The Chicago Institute for Psychoanalysis is a not-for-profit organization founded in 1932. Our mission is to provide professional training in the theory and practice of psychoanalysis and psychotherapy and to enhance psychodynamic study through research and scholarship. We also seek to apply these principles to therapeutic services for the public, offering treatment for children and adults at reduced fees, to the benefit of under served communities.

WHAT BABIES SAY BEFORE THEY CAN TALK:
The Nine Signals Infants Use to Express Their Feelings

My Journey: On the Road to Raising Happy, Capable, Responsible Children 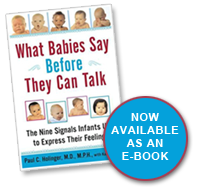 These are our earliest feelings. In time, these signals combine with each other and link up with experience to form our complex emotional life. Understanding these signals and how they work can make a world of difference for you and your baby. That is what this book is all about.

Remarkable successes have been achieved in the fields of psychiatry and psychoanalysis. However, in my opinion, we have come up short in two areas. First, we have not focused enough on prevention, and second, we have not done a good job of conveying to the public much of what is known in the area of child development.

When talking about prevention of emotional problems, I am referring to the conflict, depression, and anxiety that can result from the misunderstanding and poor regulation of feelings; I am not referring to the major psychotic illnesses with biological components such as schizophrenia or bipolar disorder, although understanding these earliest feelings can help in those conditions as well. I hope my professional colleagues will appreciate that I am trying to convey in readable fashion various features of the preverbal affective world of the infant and caregiver and the tension-regulation issues involved.

In my work, I saw that focusing on the child’s signals could produce quite remarkable results.

This book has been published in several languages and is now available as an e-book.

Co-author of What Babies Say Before They Can Talk

Kalia Doner is a writer and journalist living in New York City. She is the author or coauthor of twenty-five nonfiction books on wellness and health and is currently editor-in-chief of Remedy and Diabetes Focus magazines.

OTHER BOOKS BY DR. HOLINGER

Violent Deaths In the United States: An Epidemiologic Study of Suicide, Homicide and Accidents
The Guilford Press, 1987

This book explores the patterns of violent deaths in the United States—suicide, homicide, and accidents. The relationships between these forms of mortality are highlighted. Time trends and shifts in population demonstrate what underlie violent deaths on a large scale.

A review in the Journal of the American Medical Association (JAMA) stated:
“The strength of this book is that it clearly outlines the epidemiology of all forms of violent deaths and gives clear direction on how this knowledge can be used in developing preventive strategies to reduce violent deaths.”

Suicide and Homicide Among Adolescents
The Guilford Press, 1994

This book is aimed at non-psychiatric therapists and counselors who wish to understand better the major mental illnesses. Such illnesses as schizophrenia, bipolar disorder, personality disorders, organic problems, and more are discussed. Treatments and medications are also examined.