Spare the Kids: Why Whupping Children Won’t Save Black America 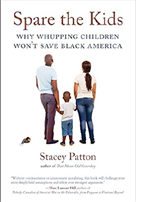 This is an absolutely remarkable, wonderful book dealing with black America and physical punishment. It is written by an African American woman, Stacey Patton, Ph.D., creator of Spare the Kids, an anti-corporal punishment organization.

“The reasons black folks hit their children are supremely complex.

During Jim Crow, whupping was used as a survival tactic to teach black children proper racial etiquette so they would not risk being beaten or lynched by whites. The practice is now a trusted form of resistance to racism because we’re convinced it does more to help than to harm. However, no reputable research has ever supported this. In fact, what fifty years of research around the world has shown is that when we hit children, we are often sowing the seeds for the very behaviors and negative outcomes that whuppings are supposed to prevent—namely, disobedience, aggression, dishonesty, antisocial behavior, mental health problems, poor educational achievement, low self-esteem, early puberty, risky sex, and a host of other issues. Whuppings are literally changing brain chemistry and the brain’s physical architecture.

Choosing a non-hitting option will take a lot of work and a lot of creativity, self-control, and patience. But we must call all forms of hitting children by their real name: violence” (p. 13, 14).