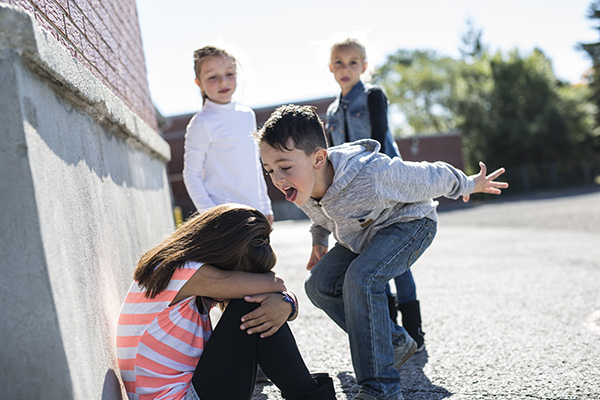 If you are a parent, then you have most likely encountered bullying in some form–whether to your child or by your child. We often discuss how bullying affects the child on the receiving end, but there is a whole other side to the equation—the actual bully. How did this young child become a bully? What influences and experiences led them to this behavior? Is the child’s bullying actually a cry for help on some level? Not to discount the damage a bully can do to an innocent child, but perhaps if we look past the outer curtain of the bully and try to explore and empathize with the underlying causes, we might be able to stop the bullying and help that child grow and develop.

When my son was in middle and high school, I found myself paying close attention to some of these dynamics; it was stunning and sad to see how those who did the bullying were so troubled and came from such troubled and aggressive/violent homes. My wife (who was very involved in the schools) and I have casually kept track of some of those families over the years. And as you might expect, the outcomes of the bullies were often not good at all—various failures, suicides, drugs, drinking, car accidents, etc. We kept thinking if only those kids and/or their parents could have gotten treatment early…

A few things to consider about the bully on the playground…

Before moving to a new school Will had been called names and bullied. He mostly kept this to himself, not sharing his feelings with his parents out of embarrassment. After moving into a new school Will started to call some of the other boy’s names when he felt insecure. Soon he was seen as the mean boy in his new group of friends. One of the group’s parents noticed this behavior and expressed concern to Will’s parents. Of course, Will’s parents were surprised, and they immediately worked to resolve the issues.

This is a wonderful example of the bullied becomes the bully. For Will, it was his way of protecting himself—strike first, hurt the other boys before they could hurt him. Thankfully, other parents noticed this behavior and talked to Will’s parents. In turn, his parents were able to address the issue and possibly spare him from additional issues down the road. Sometimes it is hard to see all the victims in a situation, but by looking past the mean words and actions we may be able to help a troubled child find a better way.